The United for Equity campaign aims at challenging and educating students on barrier-free access to post-secondary education regardless of race, ability, sexual orientation, gender identity, religion, age and socio-economic background. The campaign addresses different forms of discrimination and oppression on campus and in our communities.

This campaign also serves to address cultural appropriation, which is the adoption of elements of one culture by another culture. When members of a dominant group exploit the culture of less privileged groups, it is offensive. Wearing cultures, stereotypes, races, ethnicities and religions for a day is insulting – it comes with a long history of prejudice, discrimination, hate and colonization. For example, Halloween costumes and how some costumes are hurtful to people and cultures.

→ United for Equity is a campaign of the Canadian Federation of Students.

Laverne Cox: As part of our United For Equity campaign, your undergraduate students’ union brought Laverne Cox to campus. An outspoken transgender advocate, Cox is the first trans-woman to produce and star in her own television show, TRANSForm Me, appear on the cover of TIME Magazine (June 2014) and be nominated for an EMMY. She is also the first trans-woman of colour to have a leading role on a mainstream scripted television show, Orange is the New Black. Read more about the event here and check out the photos from the event.

A special thanks to our partners, without which this event could not have been possible: Guelph Resource Centre for Gender Empowerment & Diversity, Guelph Queer Equality, CFRU 93.3 FM, Ontario Public Interest Group Guelph and the CSA’s Student Help and Advocacy Centre, and Student Service Fee. 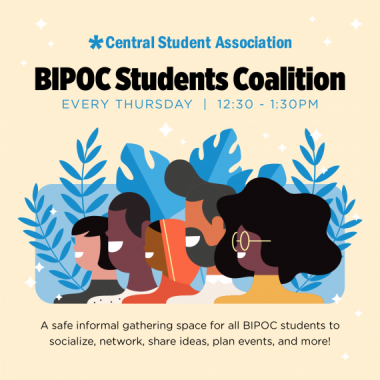 The BIPOC Students Coalition is a safe space for BIPOC students to gather, network, and share resources - click here to learn more!