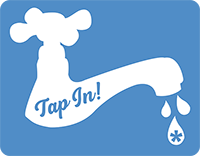 Over the past two decades, major bottled water companies have promoted their product in our schools. Meanwhile, public water supply infrastructure has been neglected and drinking water fountains continue to disappear.

In Canada, with over 100 Indigenous communities who do not have access to clean drinking water, the privatization of water is a scam as a quarter of bottled water is just tap water in new packaging. Students are fighting to reverse this wasteful trend.

As a result of our campaigning efforts, on December 5th, 2018 Hospitality Services responded to TAP IN! announcing that the Naya contract is to expire in August of 2021, and would not renewed in the future.

TapIn! was a campaign by the Central Student Association with the ultimate goal of removing bottled water from the University of Guelph campus, while increasing access to tap water.

Although this campaign began in the Summer of 2011, students have been advocating for years to remove bottled water from different spaces across campus. Groups on campus, such as Guelph Students for Environmental Change (GSEC) and its working group, “TapIn!” have played a tremendous role in creating awareness around water conservation and access to water. In 2010, TapIn! put forward a referendum question asking students whether or not they wanted to remove bottled water from the Bullring (a service brought to you by your Central Student Association); the overwhelming majority of students voted in favour of the question. As a result, except for carbonated water, the Bullring is now bottled water free!